Places With the Most Six-Figure Earners

Earning $100,000 a year is something of a milestone in American society. Not many Americans manage it, but those who do stand a good chance of leading a financially secure life. They can take that robust income and sock away cash in a high-yield savings account and invest money with a financial advisor. 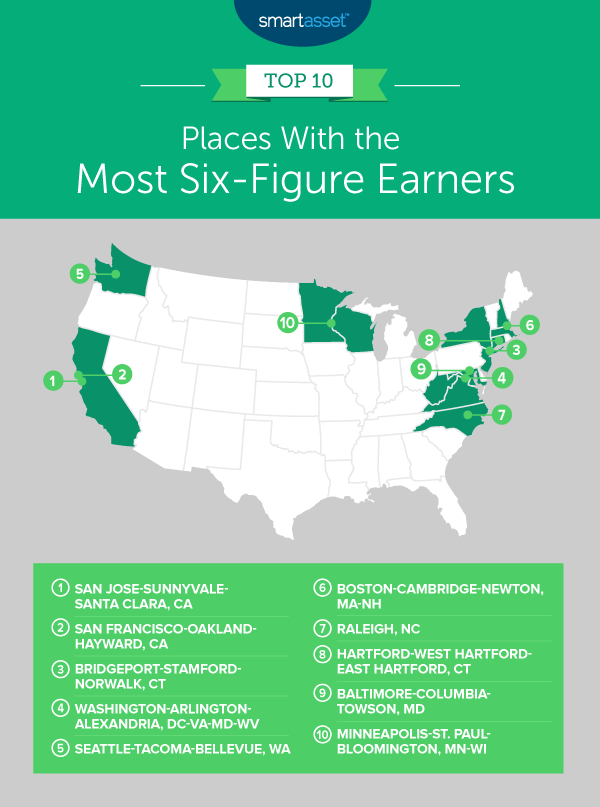 It is no surprise that residents in the San Jose-Sunnyvale-Santa Clara, California metro area earn a lot. Thanks in part to the booming tech scene, the average worker in San Jose earns more than $77,000 per year. That translates to nearly 35% of tax returns reporting incomes greater than $100,000. Not all is sunny for six-figure earners here, though: California is a high-tax state, and the San Jose metro area comes with a high cost of living.

The San Francisco metro area takes second. In total there were 2,322,840 tax returns in this metro area. Of those, 718,030 reported earnings of $100,000 or more. There are just under 41,000 software application developers here, making it one of the most popular occupations in the area. In fact, there are nearly as many of these developers as waiters and waitresses. The average software application developer gets paid more than $141,000. Famously, though, San Francisco is expensive, and you may feel like you need to earn six-figures to make ends meet here.

Just under 29% of tax returns in the Bridgeport, Connecticut metro area report at least $100,000 in income. That is the third-highest share in our study. More than 13% of tax returns report an income of more than $200,000. This metro area has 6.5 financial advisors per 1,000 jobs, one of the highest rates in the country. Financial advisors earn more than $100,000 on average. Plus, with so many in the city, local residents should be able to seek out the best advice to make the most out of their investments.

Up in fifth is Seattle. More than 26% of tax returns in this metro area reported incomes of at least $100,000. Fans of the TV show "Frasier" will also be delighted to know that his legacy lives on in the Emerald City. According to BLS data, psychiatrist is the highest-paying profession in the city, with an average income nearly topping $273,000. That said, shrinks aren't legion here. A wide-variety of high-earners is what makes the proportion of residents who bring in more than $100,000 so high. The six-figure-paying occupation with the most workers is software developer.

The metro area of Massachusetts' capital comes in sixth. Nearly 620,000 of the 2.4 million tax returns from this area report an income above $100,000. Of those 2.4 million, just under 9% report incomes above $200,000. The biopharmaceutical industry is especially important here. More than 6,200 residents are employed as either biochemists or biomedical engineers, two occupations that both pay around six figures, on average.

Located within the Raleigh, North Carolina metro area is the Research Triangle Park, the largest research park in America. Jobs in the research park are well-paying for the most part, a fact that explains why there are so many six-figure earners here. In total, there were about 602,000 tax returns filed in this metro area, and just under 139,000 reported earning over six-figures. In percent terms, that means slightly more than 23% of tax returns report six-figure income.

This metro area straddling Minnesota and Wisconsin takes the 10th spot. There were nearly 1.8 million tax returns filed here, according to the latest IRS data. Of those, slightly more than 404,000 reported earning at least $100,000 per year. The Minneapolis metro area stands out as a place with a large chunk of their six-figure earners making less than $200,000. Nearly 17% of tax returns here report earnings between $100,000 and $200,000, while just under 6% report income above $200,000. 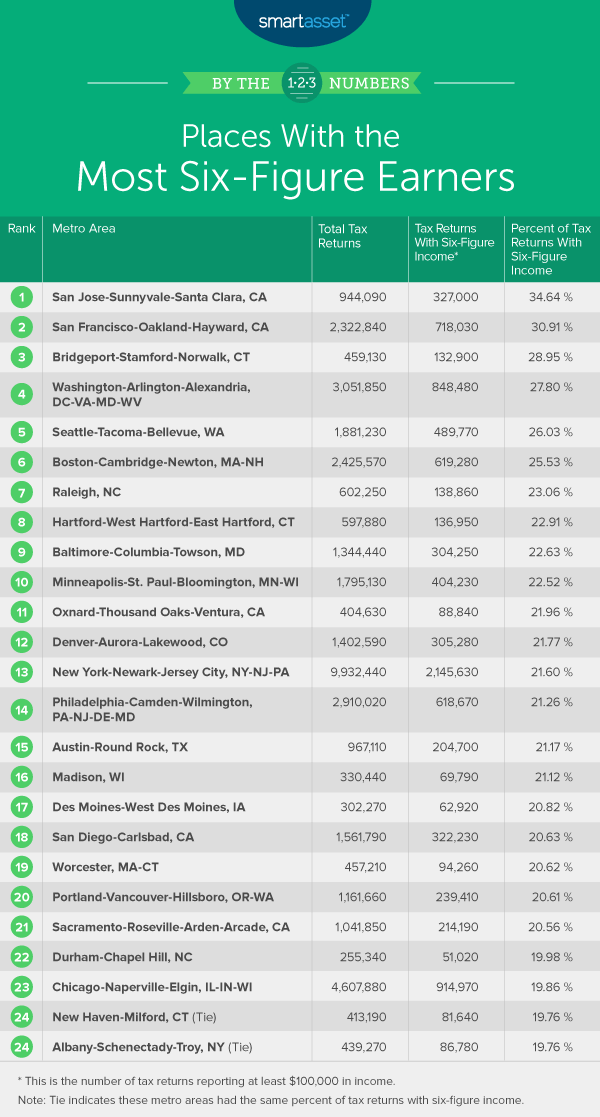 Tips for Increasing Your Wealth